Other than the poles, Chile’s Atacama Desert is the driest place on Earth. Deserts are sometimes defined as environments that receive less than an average of 250mm of rain in a year – the Atacama receives less than 1mm each year. As a result it is almost entirely without greenery, shade, cities or pollution. For landscape photographers – and idle dreamers – the setting is inspiring, with wind-sculpted canyons and salt lakes providing a backdrop that not only looks Martian but is actually used to test Mars rovers in simulations. Atacama is also one of the world’s foremost stargazing centres, with three major international observatories taking advantage of its clean air and huge night skies. 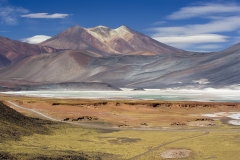 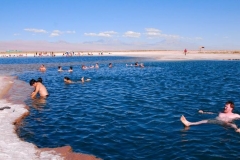 What to see and how

If planning a three to four-day trip, stay in San Pedro, the main town, and make excursions to the nearby salt lake, geysers and observatories. If you have a week, explore the northern mines and churches. Peak summer holiday season in Chile is Christmas to late February.

San Pedro and the salt flat

San Pedro de Atacama, which lies beside its namesake salt flat at 7,900ft above sea level, morphed, during the Nineties, from a quartz and copper mining town into a backpacker hang-out. It is now a picturesque, if overbuilt, resort town with tree-lined plazas, a pretty, 17th-century church and more cybercafes than you’d ever need.

From San Pedro, it’s only an 11-mile drive south to the Salar de Atacama, Chile’s largest salt flat. You can across the barren valley of salt which has hardened into a sort of ice rink of hexagons or been coaxed by wind and subterranean pressures into wavelike crests. Flamingos forage in the few pools of salty water that remain, bright pink against the creamy white saltscape.

The most popular excursion from San Pedro is to the El Tatio geysers, at 14,173ft above sea level. As these are 55 miles from town, a 4am start is required. The drama begins when the rising sun slants across the field of some 80 geysers – which spurt highest when the cold morning atmosphere prevents the steam from evaporating.

To see lunar and Martian landscapes, drive your campervan to see the sunset on the sculpted rock formations of the Valle de la Luna, Valle de la Muerte and Tres Marías. As well as these easy walks, there are several good day-hikes in the area, including the Kari Gorge, Puritama Thermal Springs and, for the intrepid, the nearby 19,590ft Sairecabur volcano. The 18,346ft Volcán Láscar, the most active volcano in northern Chile, is probably best enjoyed from a distance.

The Atacama Desert is a small corner of the immense high plateau (altiplano in Spanish) that stretches east to the foot of the Andes and west and north into Argentina, Bolivia and Peru. A wonderful way to explore the corner closest to the Atacama is to take a 4WD road trip to/from the town of Uyuni in Bolivia, crossing the Uyuni salt flat. It’s an ideal adventure for those who find rainforests hot and claustrophobic – though the altiplano can be literally as well as visually breathtaking – and there’s a good chance of seeing herds of vicuña and alpacas as well as viscachas, flamingos and condors.

Across the Andes to Argentina

Chile’s RN51 road crosses the gravel-surfaced 12,716ft Paso de Socompa to Salta; the RN52 crosses the even higher (14,100ft), but paved, Paso de Jama to San Salvador de Jujuy. Both routes are used, though winter snowfalls can disrupt the border passes. crossings by 4WD from Salta in Argentina to San Pedro, via the pretty town of Cachi in the Calchaquí valley, the arid, dusty Abra del Acay – the highest point on Argentina’s Ruta 40 – and the Paso Sico (15,030ft).

Best time to do: all year