Chile is a great place to be a surfer much in the same way California was in the 1950’s – lots of quality breaks and few people. Chile has over 2700 miles of uncrowded, wave-rich coastline that comes complete with stunning landscapes, great food, friendly people and hundreds of diverse surf break setups. A look at the different regions will give you a rough overview of when and where to surf in Chile.

Chile can be broken down into the north, central, and southern zones.

Northern Chile is much like southern Peru in that it is dominated by the Atacama Desert. You can expect terrain similar to Baja with plentiful reef, rock, and point breaks. The waves are best during fall (September – November) due to consistent south swells, and are burly and hollow in the summer (November – March) due to consistent swells from the north. El Gringo is widely known as an expert spot were even the pros were helmets. The north is also the best area for regular-foots due to the number of right-breaking waves located here. El Colegio is one example of Chilean right breaking power. I would suggest bringing at least three boards since Chile gets big along the entire coast, your favorite all-around board and a semi-gun is advised. The north is the warmest of the three regions; during the fall and summer you can comfortably don a 3/2 wetsuit with booties and gloves optional. Minimal crowds and consistent firing points make this a good destination. 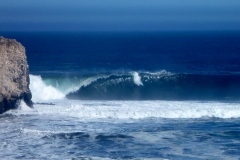 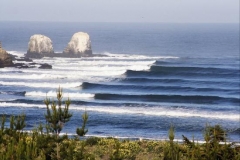 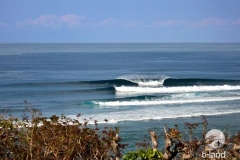 Central Chile is dominated by the capitol city of Santiago, which holds a population of 10 million. As a result the central zone has the largest surf population but is still relatively un-crowded by most standards. The Mediterranean climate and consistent surf make this a popular choice for traveling surfers. Chile’s “surf city”, Pichilemu, is located here and is considered the hub for all things surfing; it’s a great place to find a surf shop and fulfill other surf-related needs. Like the north, this region also fires in the fall, but unlike the northern region, water temperatures are cooler (mid to high fifties) and require a 4/3 wetsuite with booties, gloves and hood. The crown jewel among the region’s many left-handed points is Punta Los Lobos, which is a great wave at a small to moderate size and is also a good option for those looking to practice in large surf. Again, as with all of Chile, the waves can, and do, turn large and powerful so be prepared with the proper equipment and local knowledge.

Southern Chile, which is the country’s most pristine region, is dominated by the Andes Mountains and a countless number of un-crowded left points. The snow capped Andes are always in view, as are the pristine forests, rolling hills and green valleys. Chile’s Southern region is the most pristine, and least explored area in Chile, and some would argue, the world. There are big waves and long empty points to be discovered and surfed in this region. In a nutshell, the water is cold, the waves are excellent and the scenery is spectacular. Grab you 4/3 and go.

Chile is a great place for anyone to visit, but for a surfer looking to experience a budding surf culture hosted by friendly surfers and great waves, Chile is ideal.